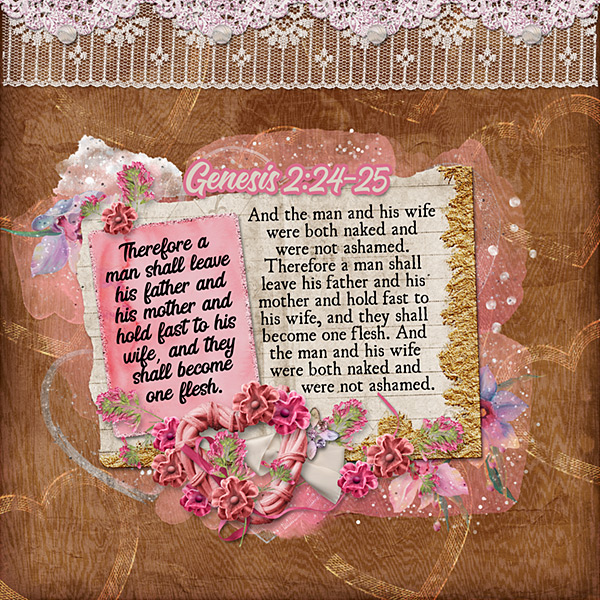 collection: Let There Be: Love by A Giving Heart Studio

Note that they were “clothed” spiritually with righteousness because they had not yet sinned. They realized they were naked physically when they sinned against God by disobeying His one command. However, their attempts to clothe themselves were ineffective. Only God could properly clothe them, and that physical clothing required the shedding of blood in order to obtain animal skins – whereas our spiritual clothing today required the shedding of Jesus’ blood on the cross to clothe us in righteousness. First comes the physical, then the spiritual. (1Cor. 15:46)

So when the woman saw that the tree was good for food, and that it was a delight to the eyes, and that the tree was to be desired to make one wise, she took of its fruit and ate, and she also gave some to her husband who was with her, and he ate. Then the eyes of both were opened, and they knew that they were naked. And they sewed fig leaves together and made themselves loincloths. Genesis 3:6-7

And the LORD God made for Adam and for his wife garments of skins and clothed them. Genesis 3:21

For we know that if the tent that is our earthly home is destroyed, we have a building from God, a house not made with hands, eternal in the heavens. For in this tent we groan, longing to put on our heavenly dwelling, if indeed by putting it on we may not be found naked. For while we are still in this tent, we groan, being burdened—not that we would be unclothed, but that we would be further clothed, so that what is mortal may be swallowed up by life. He who has prepared us for this very thing is God, who has given us the Spirit as a guarantee. So we are always of good courage. We know that while we are at home in the body we are away from the Lord, for we walk by faith, not by sight. Yes, we are of good courage, and we would rather be away from the body and at home with the Lord. So whether we are at home or away, we make it our aim to please him. For we must all appear before the judgment seat of Christ, so that each one may receive what is due for what he has done in the body, whether good or evil. Therefore, knowing the fear of the Lord, we persuade others. But what we are is known to God, and I hope it is known also to your conscience. We are not commending ourselves to you again but giving you cause to boast about us, so that you may be able to answer those who boast about outward appearance and not about what is in the heart. For if we are beside ourselves, it is for God; if we are in our right mind, it is for you. For the love of Christ controls us, because we have concluded this: that one has died for all, therefore all have died; and he died for all, that those who live might no longer live for themselves but for him who for their sake died and was raised. From now on, therefore, we regard no one according to the flesh. Even though we once regarded Christ according to the flesh, we regard him thus no longer. Therefore, if anyone is in Christ, he is a new creation. The old has passed away; behold, the new has come. All this is from God, who through Christ reconciled us to himself and gave us the ministry of reconciliation; that is, in Christ God was reconciling the world to himself, not counting their trespasses against them, and entrusting to us the message of reconciliation. Therefore, we are ambassadors for Christ, God making his appeal through us. We implore you on behalf of Christ, be reconciled to God. For our sake he made him to be sin who knew no sin, so that in him we might become the righteousness of God. 2 Corinthians 5:1-21

For as many of you as were baptized into Christ have put on Christ. There is neither Jew nor Greek, there is neither slave nor free, there is no male and female, for you are all one in Christ Jesus. And if you are Christ’s, then you are Abraham’s offspring, heirs according to promise. Galatians 3:27-29

“And to the angel of the church in Sardis write: ‘The words of him who has the seven spirits of God and the seven stars. “‘I know your works. You have the reputation of being alive, but you are dead. Wake up, and strengthen what remains and is about to die, for I have not found your works complete in the sight of my God.  Remember, then, what you received and heard. Keep it, and repent. If you will not wake up, I will come like a thief, and you will not know at what hour I will come against you. Yet you have still a few names in Sardis, people who have not soiled their garments, and they will walk with me in white, for they are worthy.  The one who conquers will be clothed thus in white garments, and I will never blot his name out of the book of life. I will confess his name before my Father and before his angels.  He who has an ear, let him hear what the Spirit says to the churches.’ Revelation 3:1-6

“And to the angel of the church in Laodicea write: ‘The words of the Amen, the faithful and true witness, the beginning of God’s creation. “‘I know your works: you are neither cold nor hot. Would that you were either cold or hot! So, because you are lukewarm, and neither hot nor cold, I will spit you out of my mouth.  For you say, I am rich, I have prospered, and I need nothing, not realizing that you are wretched, pitiable, poor, blind, and naked. I counsel you to buy from me gold refined by fire, so that you may be rich, and white garments so that you may clothe yourself and the shame of your nakedness may not be seen, and salve to anoint your eyes, so that you may see.  Those whom I love, I reprove and discipline, so be zealous and repent. Behold, I stand at the door and knock. If anyone hears my voice and opens the door, I will come in to him and eat with him, and he with me.  The one who conquers, I will grant him to sit with me on my throne, as I also conquered and sat down with my Father on his throne.  He who has an ear, let him hear what the Spirit says to the churches.’” Revelation 3:14-22

And he said to me, “Do not seal up the words of the prophecy of this book, for the time is near. Let the evildoer still do evil, and the filthy still be filthy, and the righteous still do right, and the holy still be holy.” “Behold, I am coming soon, bringing my recompense with me, to repay each one for what he has done.  I am the Alpha and the Omega, the first and the last, the beginning and the end.” Blessed are those who wash their robes, so that they may have the right to the tree of life and that they may enter the city by the gates. Outside are the dogs and sorcerers and the sexually immoral and murderers and idolaters, and everyone who loves and practices falsehood.  “I, Jesus, have sent my angel to testify to you about these things for the churches. I am the root and the descendant of David, the bright morning star.” The Spirit and the Bride say, “Come.” And let the one who hears say, “Come.” And let the one who is thirsty come; let the one who desires take the water of life without price. I warn everyone who hears the words of the prophecy of this book: if anyone adds to them, God will add to him the plagues described in this book, and if anyone takes away from the words of the book of this prophecy, God will take away his share in the tree of life and in the holy city, which are described in this book. He who testifies to these things says, “Surely I am coming soon.” Amen. Come, Lord Jesus! The grace of the Lord Jesus be with all. Amen. Revelation 22:10-21