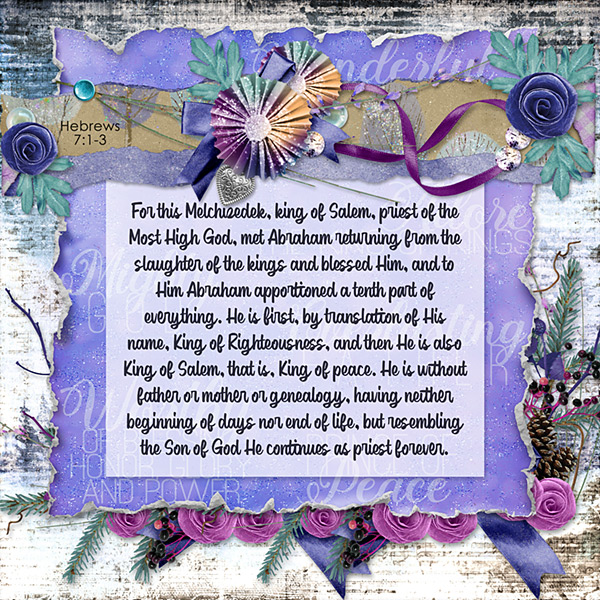 For this Melchizedek, King of Salem, Priest of the Most High God, met Abraham returning from the slaughter of the kings and blessed Him, and to Him Abraham apportioned a tenth part of everything. He is first, by translation of His name, king of righteousness, and then He is also king of Salem, that is, king of peace. He is without father or mother or genealogy, having neither beginning of days nor end of life, but resembling the Son of God He continues as priest forever. Hebrews 7:1-3

collection: Worship the King by A Giving Heart Studio

Needless to say, there is no human in history who did not have a mother or father, beginning or end of days, referred to as the Son of God – except Jesus (who is both God and man).

For in him the whole fullness of deity dwells bodily, and you have been filled in him, who is the head of all rule and authority. Colossians 2:9-10

Have this mind among yourselves, which is yours in Christ Jesus, who, though he was in the form of God, did not count equality with God a thing to be grasped, but emptied himself, by taking the form of a servant, being born in the likeness of men. And being found in human form, he humbled himself by becoming obedient to the point of death, even death on a cross. Therefore God has highly exalted him and bestowed on him the name that is above every name, so that at the name of Jesus every knee should bow, in heaven and on earth and under the earth, and every tongue confess that Jesus Christ is Lord, to the glory of God the Father. Philippians 2:5-11

Since then we have a great high priest who has passed through the heavens, Jesus, the Son of God, let us hold fast our confession. Hebrews 4:14

Since then we have a great high priest who has passed through the heavens, Jesus, the Son of God, let us hold fast our confession. For we do not have a high priest who is unable to sympathize with our weaknesses, but one who in every respect has been tempted as we are, yet without sin. Let us then with confidence draw near to the throne of grace, that we may receive mercy and find grace to help in time of need. For every high priest chosen from among men is appointed to act on behalf of men in relation to God, to offer gifts and sacrifices for sins. He can deal gently with the ignorant and wayward, since he himself is beset with weakness. Because of this he is obligated to offer sacrifice for his own sins just as he does for those of the people. And no one takes this honor for himself, but only when called by God, just as Aaron was. So also Christ did not exalt himself to be made a high priest, but was appointed by him who said to him, “You are my Son, today I have begotten you”; as he says also in another place, “You are a priest forever, after the order of Melchizedek.” Hebrews 4:14-5:6

Then I saw heaven opened, and behold, a white horse! The one sitting on it is called Faithful and True, and in righteousness he judges and makes war. His eyes are like a flame of fire, and on his head are many diadems, and he has a name written that no one knows but himself. He is clothed in a robe dipped in blood, and the name by which he is called is The Word of God. And the armies of heaven, arrayed in fine linen, white and pure, were following him on white horses. From his mouth comes a sharp sword with which to strike down the nations, and he will rule them with a rod of iron. He will tread the winepress of the fury of the wrath of God the Almighty. On his robe and on his thigh he has a name written, King of kings and Lord of lords. Revelation 19:11-16

Why do the nations rage and the peoples plot in vain? The kings of the earth set themselves, and the rulers take counsel together, against the LORD and against his Anointed, saying, “Let us burst their bonds apart and cast away their cords from us.” He who sits in the heavens laughs; the Lord holds them in derision. Then he will speak to them in his wrath, and terrify them in his fury, saying, “As for me, I have set my King on Zion, my holy hill.” I will tell of the decree: The LORD said to me, “You are my Son; today I have begotten you. Ask of me, and I will make the nations your heritage, and the ends of the earth your possession. You shall break them with a rod of iron and dash them in pieces like a potter’s vessel.” Now therefore, O kings, be wise; be warned, O rulers of the earth. ​Serve the LORD with fear, and rejoice with trembling. ​Kiss the Son, lest he be angry, and you perish in the way, for his wrath is quickly kindled. Blessed are all who take refuge in him. Psalms 2:1-12

​For to us a child is born, to us a son is given; and the government shall be upon his shoulder, and his name shall be called Wonderful Counselor, Mighty God, Everlasting Father, Prince of Peace. Of the increase of his government and of peace there will be no end, on the throne of David and over his kingdom, to establish it and to uphold it with justice and with righteousness from this time forth and forevermore. The zeal of the LORD of hosts will do this. Isaiah 9:6-7

And the angel of the LORD solemnly assured Joshua, “Thus says the LORD of hosts: If you will walk in my ways and keep my charge, then you shall rule my house and have charge of my courts, and I will give you the right of access among those who are standing here. Hear now, O Joshua the high priest, you and your friends who sit before you, for they are men who are a sign: behold, I will bring my servant the Branch. Zechariah 3:6-8

Now Moses was faithful in all God’s house as a servant, to testify to the things that were to be spoken later, but Christ is faithful over God’s house as a son. And we are his house if indeed we hold fast our confidence and our boasting in our hope. Hebrews 3:5-6

And say to him, ‘Thus says the LORD of hosts, “Behold, the man whose name is the Branch: for he shall branch out from his place, and he shall build the temple of the LORD. It is he who shall build the temple of the LORD and shall bear royal honor, and shall sit and rule on his throne. And there shall be a priest on his throne, and the counsel of peace shall be between them both.”’ Zechariah 6:12-13