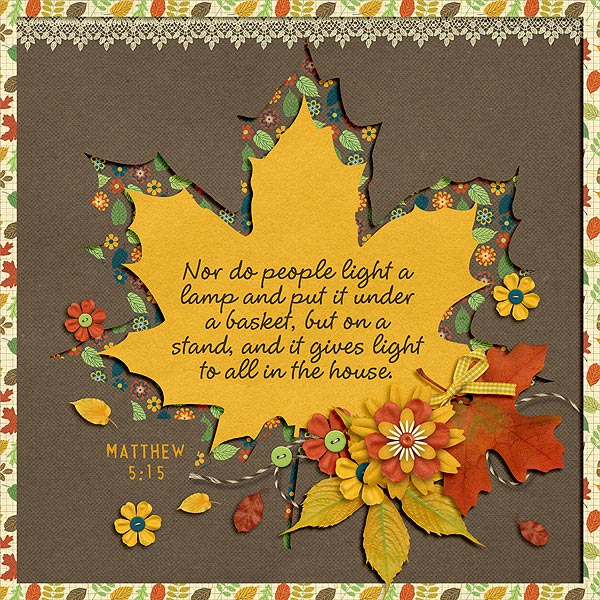 Nor do people light a lamp and put it under a basket, but on a stand, and it gives light to all in the house. Matthew 5:15

On a side note, this is Day 2000 for this blog, which means that by God’s grace and with His help, I have posted 2,000 layouts through today. Thank you to everyone who visits and especially to those who share so that others can receive encouragement from the Bible as well! Today’s verse is about shining our lights, which is exactly what this blog is about. ❦

“You are the salt of the earth, but if salt has lost its taste, how shall its saltiness be restored? It is no longer good for anything except to be thrown out and trampled under people’s feet. You are the light of the world. A city set on a hill cannot be hidden. Nor do people light a lamp and put it under a basket, but on a stand, and it gives light to all in the house. In the same way, let your light shine before others, so that they may see your good works and give glory to your Father who is in heaven. Matthew 5:13-15

And he said to them, “Is a lamp brought in to be put under a basket, or under a bed, and not on a stand? For nothing is hidden except to be made manifest; nor is anything secret except to come to light. If anyone has ears to hear, let him hear.” And he said to them, “Pay attention to what you hear: with the measure you use, it will be measured to you, and still more will be added to you. For to the one who has, more will be given, and from the one who has not, even what he has will be taken away.” Mark 4:21-25

You shall make seven lamps for it. And the lamps shall be set up so as to give light on the space in front of it. Exodus 25:37

“Speak to Aaron and say to him, When you set up the lamps, the seven lamps shall give light in front of the lampstand.” Numbers 8:2

Then I turned to see the voice that was speaking to me, and on turning I saw seven golden lampstands, and in the midst of the lampstands one like a son of man, clothed with a long robe and with a golden sash around his chest. The hairs of his head were white, like white wool, like snow. His eyes were like a flame of fire, his feet were like burnished bronze, refined in a furnace, and his voice was like the roar of many waters. In his right hand he held seven stars, from his mouth came a sharp two-edged sword, and his face was like the sun shining in full strength. When I saw him, I fell at his feet as though dead. But he laid his right hand on me, saying, “Fear not, I am the first and the last, and the living one. I died, and behold I am alive forevermore, and I have the keys of Death and Hades. Write therefore the things that you have seen, those that are and those that are to take place after this. As for the mystery of the seven stars that you saw in my right hand, and the seven golden lampstands, the seven stars are the angels of the seven churches, and the seven lampstands are the seven churches. Revelation 1:12-20