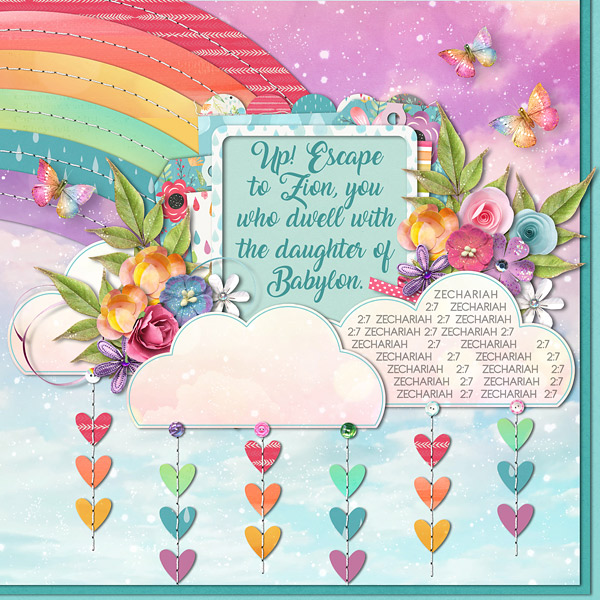 Up! Escape to Zion, you who dwell with the daughter of Babylon. Zechariah 2:7

kit: Look Up: When It Rains Look for Rainbows by Kristin Cronin-Barrow; template by Cindy Schneider

Up! Up! Flee from the land of the north, declares the LORD. For I have spread you abroad as the four winds of the heavens, declares the LORD. Up! Escape to Zion, you who dwell with the daughter of Babylon. For thus said the LORD of hosts, after his glory sent me to the nations who plundered you, for he who touches you touches the apple of his eye: “Behold, I will shake my hand over them, and they shall become plunder for those who served them. Then you will know that the LORD of hosts has sent me. Sing and rejoice, O daughter of Zion, for behold, I come and I will dwell in your midst, declares the LORD. And many nations shall join themselves to the LORD in that day, and shall be my people. And I will dwell in your midst, and you shall know that the LORD of hosts has sent me to you. And the LORD will inherit Judah as his portion in the holy land, and will again choose Jerusalem.” Be silent, all flesh, before the LORD, for he has roused himself from his holy dwelling. Zechariah 2:6-13

Then I looked, and behold, on Mount Zion stood the Lamb, and with him 144,000 who had his name and his Father’s name written on their foreheads. And I heard a voice from heaven like the roar of many waters and like the sound of loud thunder. The voice I heard was like the sound of harpists playing on their harps, and they were singing a new song before the throne and before the four living creatures and before the elders. No one could learn that song except the 144,000 who had been redeemed from the earth. It is these who have not defiled themselves with women, for they are virgins. It is these who follow the Lamb wherever he goes. These have been redeemed from mankind as firstfruits for God and the Lamb, and in their mouth no lie was found, for they are blameless. Revelation 14:1-5

Strive for peace with everyone, and for the holiness without which no one will see the Lord. See to it that no one fails to obtain the grace of God; that no “root of bitterness” springs up and causes trouble, and by it many become defiled; that no one is sexually immoral or unholy like Esau, who sold his birthright for a single meal. For you know that afterward, when he desired to inherit the blessing, he was rejected, for he found no chance to repent, though he sought it with tears. For you have not come to what may be touched, a blazing fire and darkness and gloom and a tempest and the sound of a trumpet and a voice whose words made the hearers beg that no further messages be spoken to them. For they could not endure the order that was given, “If even a beast touches the mountain, it shall be stoned.” Indeed, so terrifying was the sight that Moses said, “I tremble with fear.” But you have come to Mount Zion and to the city of the living God, the heavenly Jerusalem, and to innumerable angels in festal gathering, and to the assembly of the firstborn who are enrolled in heaven, and to God, the judge of all, and to the spirits of the righteous made perfect, and to Jesus, the mediator of a new covenant, and to the sprinkled blood that speaks a better word than the blood of Abel. See that you do not refuse him who is speaking. For if they did not escape when they refused him who warned them on earth, much less will we escape if we reject him who warns from heaven. At that time his voice shook the earth, but now he has promised, “Yet once more I will shake not only the earth but also the heavens.” This phrase, “Yet once more,” indicates the removal of things that are shaken—that is, things that have been made—in order that the things that cannot be shaken may remain. Therefore let us be grateful for receiving a kingdom that cannot be shaken, and thus let us offer to God acceptable worship, with reverence and awe, for our God is a consuming fire. Hebrews 12:14-29 (Also see Col. 3.)

These all died in faith, not having received the things promised, but having seen them and greeted them from afar, and having acknowledged that they were strangers and exiles on the earth. For people who speak thus make it clear that they are seeking a homeland. If they had been thinking of that land from which they had gone out, they would have had opportunity to return. But as it is, they desire a better country, that is, a heavenly one. Therefore God is not ashamed to be called their God, for he has prepared for them a city. Hebrews 11:13-16

After this I saw another angel coming down from heaven, having great authority, and the earth was made bright with his glory. And he called out with a mighty voice, “Fallen, fallen is Babylon the great! She has become a dwelling place for demons, a haunt for every unclean spirit, a haunt for every unclean bird, a haunt for every unclean and detestable beast. For all nations have drunk the wine of the passion of her sexual immorality, and the kings of the earth have committed immorality with her, and the merchants of the earth have grown rich from the power of her luxurious living.” Then I heard another voice from heaven saying, “Come out of her, my people, lest you take part in her sins, lest you share in her plagues; for her sins are heaped high as heaven, and God has remembered her iniquities. Pay her back as she herself has paid back others, and repay her double for her deeds; mix a double portion for her in the cup she mixed. As she glorified herself and lived in luxury, so give her a like measure of torment and mourning, since in her heart she says, ‘I sit as a queen, I am no widow, and mourning I shall never see.’ For this reason her plagues will come in a single day, death and mourning and famine, and she will be burned up with fire; for mighty is the Lord God who has judged her.” And the kings of the earth, who committed sexual immorality and lived in luxury with her, will weep and wail over her when they see the smoke of her burning. They will stand far off, in fear of her torment, and say, “Alas! Alas! You great city, you mighty city, Babylon! For in a single hour your judgment has come.” And the merchants of the earth weep and mourn for her, since no one buys their cargo anymore, cargo of gold, silver, jewels, pearls, fine linen, purple cloth, silk, scarlet cloth, all kinds of scented wood, all kinds of articles of ivory, all kinds of articles of costly wood, bronze, iron and marble, cinnamon, spice, incense, myrrh, frankincense, wine, oil, fine flour, wheat, cattle and sheep, horses and chariots, and slaves, that is, human souls. “The fruit for which your soul longed has gone from you, and all your delicacies and your splendors are lost to you, never to be found again!” The merchants of these wares, who gained wealth from her, will stand far off, in fear of her torment, weeping and mourning aloud, “Alas, alas, for the great city that was clothed in fine linen, in purple and scarlet, adorned with gold, with jewels, and with pearls! For in a single hour all this wealth has been laid waste.” And all shipmasters and seafaring men, sailors and all whose trade is on the sea, stood far off and cried out as they saw the smoke of her burning, “What city was like the great city?” And they threw dust on their heads as they wept and mourned, crying out, “Alas, alas, for the great city where all who had ships at sea grew rich by her wealth! For in a single hour she has been laid waste. Rejoice over her, O heaven, and you saints and apostles and prophets, for God has given judgment for you against her!” Then a mighty angel took up a stone like a great millstone and threw it into the sea, saying, “So will Babylon the great city be thrown down with violence, and will be found no more; and the sound of harpists and musicians, of flute players and trumpeters, will be heard in you no more, and a craftsman of any craft will be found in you no more, and the sound of the mill will be heard in you no more, and the light of a lamp will shine in you no more, and the voice of bridegroom and bride will be heard in you no more, for your merchants were the great ones of the earth, and all nations were deceived by your sorcery. And in her was found the blood of prophets and of saints, and of all who have been slain on earth.” Revelation 18:1-24