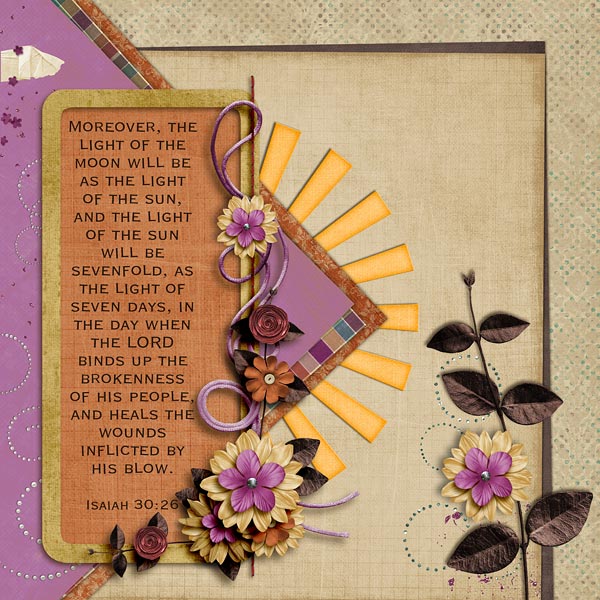 Then you will defile your carved idols overlaid with silver and your gold-plated metal images. You will scatter them as unclean things. You will say to them, “Be gone!” And he will give rain for the seed with which you sow the ground, and bread, the produce of the ground, which will be rich and plenteous. In that day your livestock will graze in large pastures, and the oxen and the donkeys that work the ground will eat seasoned fodder, which has been winnowed with shovel and fork. And on every lofty mountain and every high hill there will be brooks running with water, in the day of the great slaughter, when the towers fall. Moreover, the light of the moon will be as the light of the sun, and the light of the sun will be sevenfold, as the light of seven days, in the day when the LORD binds up the brokenness of his people, and heals the wounds inflicted by his blow. Behold, the name of the LORD comes from afar, burning with his anger, and in thick rising smoke; his lips are full of fury, and his tongue is like a devouring fire; his breath is like an overflowing stream that reaches up to the neck; to sift the nations with the sieve of destruction, and to place on the jaws of the peoples a bridle that leads astray. You shall have a song as in the night when a holy feast is kept, and gladness of heart, as when one sets out to the sound of the flute to go to the mountain of the LORD, to the Rock of Israel. And the LORD will cause his majestic voice to be heard and the descending blow of his arm to be seen, in furious anger and a flame of devouring fire, with a cloudburst and storm and hailstones. The Assyrians will be terror-stricken at the voice of the LORD, when he strikes with his rod. And every stroke of the appointed staff that the LORD lays on them will be to the sound of tambourines and lyres. Battling with brandished arm, he will fight with them. For a burning place has long been prepared; indeed, for the king it is made ready, its pyre made deep and wide, with fire and wood in abundance; the breath of the LORD, like a stream of sulfur, kindles it. Isaiah 30:22-33

As I went back, I saw on the bank of the river very many trees on the one side and on the other. And he said to me, “This water flows toward the eastern region and goes down into the Arabah, and enters the sea; when the water flows into the sea, the water will become fresh. And wherever the river goes, every living creature that swarms will live, and there will be very many fish. For this water goes there, that the waters of the sea may become fresh; so everything will live where the river goes. Fishermen will stand beside the sea. From Engedi to Eneglaim it will be a place for the spreading of nets. Its fish will be of very many kinds, like the fish of the Great Sea. But its swamps and marshes will not become fresh; they are to be left for salt. And on the banks, on both sides of the river, there will grow all kinds of trees for food. Their leaves will not wither, nor their fruit fail, but they will bear fresh fruit every month, because the water for them flows from the sanctuary. Their fruit will be for food, and their leaves for healing.” Ezekiel 47:7-12

Then the angel showed me the river of the water of life, bright as crystal, flowing from the throne of God and of the Lamb through the middle of the street of the city; also, on either side of the river, the tree of life with its twelve kinds of fruit, yielding its fruit each month. The leaves of the tree were for the healing of the nations. No longer will there be anything accursed, but the throne of God and of the Lamb will be in it, and his servants will worship him. They will see his face, and his name will be on their foreheads. And night will be no more. They will need no light of lamp or sun, for the Lord God will be their light, and they will reign forever and ever. Revelation 22:1-5

“Come, let us return to the LORD; for he has torn us, that he may heal us; he has struck us down, and he will bind us up. After two days he will revive us; on the third day he will raise us up, that we may live before him. Let us know; let us press on to know the LORD; his going out is sure as the dawn; he will come to us as the showers, as the spring rains that water the earth.” Hosea 6:1-3

“Behold, blessed is the one whom God reproves; therefore despise not the discipline of the Almighty. For he wounds, but he binds up; he shatters, but his hands heal. Job 5:17-18