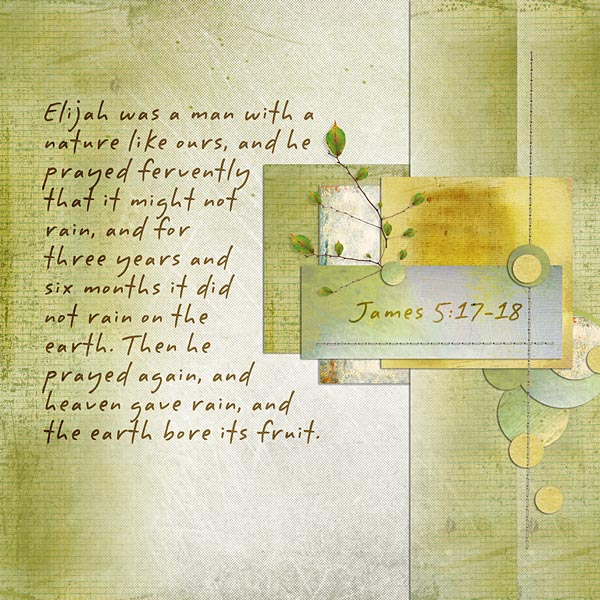 Elijah was a man with a nature like ours, and he prayed fervently that it might not rain, and for three years and six months it did not rain on the earth. Then he prayed again, and heaven gave rain, and the earth bore its fruit. James 5:17-18

Heavenly Father, We know that the greatest time of tribulation that ever has been or will be is going to come upon the earth.  We are inexpressibly grateful and relieved that those of us who believe in Jesus as our Savior and Lord and are His possession, given by you, will not suffer your wrath.  We know that you will never leave us alone through anything we experience in this life.  Please help us to be prepared so that whatever happens, your name will be honored and glorified.  You said that everything that can be shaken will be shaken.  We know that your Spirit dwells in us and cannot be shaken, if only we put all of our trust and hope in you.  Thank you for your strength, mercy, grace, peace, wisdom and love.  Please help us to display all of these beautiful, powerful ways of yours to this lost and dying world, and not to join in with the darkened world in complaining, fearing, sinning or supporting sin, or any other way that does not reflect well on you.  We know that you desire for all to repent and be saved, and we love whom you love.  Please use us to reach those blinded by the “ruler” of this world so that your courts will be filled to overflowing with the praises of the redeemed, for all eternity.  We love you more than we can possibly put into words.  Please search our hearts and work out what is within us for the world to see your goodness and glory.  In the Name above all names, the King of kings and Lord of lords, who is our precious and beloved Redeemer, Jesus, Amen.

Then I was given a measuring rod like a staff, and I was told, “Rise and measure the temple of God and the altar and those who worship there,  but do not measure the court outside the temple; leave that out, for it is given over to the nations, and they will trample the holy city for forty-two months.  And I will grant authority to my two witnesses, and they will prophesy for 1,260 days, clothed in sackcloth.”  These are the two olive trees and the two lampstands that stand before the Lord of the earth.  And if anyone would harm them, fire pours from their mouth and consumes their foes. If anyone would harm them, this is how he is doomed to be killed.  They have the power to shut the sky, that no rain may fall during the days of their prophesying, and they have power over the waters to turn them into blood and to strike the earth with every kind of plague, as often as they desire. Revelation 11:1-6

For I will pass through the land of Egypt that night, and I will strike all the firstborn in the land of Egypt, both man and beast; and on all the gods of Egypt I will execute judgments: I am the LORD.  The blood shall be a sign for you, on the houses where you are. And when I see the blood, I will pass over you, and no plague will befall you to destroy you, when I strike the land of Egypt. Exodus 12:12-13

And the LORD said to him, “Pass through the city, through Jerusalem, and put a mark on the foreheads of the men who sigh and groan over all the abominations that are committed in it.” Ezekiel 9:4

And it is God who establishes us with you in Christ, and has anointed us,  and who has also put his seal on us and given us his Spirit in our hearts as a guarantee. 2 Corinthians 1:21-22

“I have manifested your name to the people whom you gave me out of the world. Yours they were, and you gave them to me, and they have kept your word.”John 17:6

Now concerning the times and the seasons, brothers, you have no need to have anything written to you.  For you yourselves are fully aware that the day of the Lord will come like a thief in the night.  While people are saying, “There is peace and security,” then sudden destruction will come upon them as labor pains come upon a pregnant woman, and they will not escape.  But you are not in darkness, brothers, for that day to surprise you like a thief.  For you are all children of light, children of the day. We are not of the night or of the darkness.  So then let us not sleep, as others do, but let us keep awake and be sober.  For those who sleep, sleep at night, and those who get drunk, are drunk at night.  But since we belong to the day, let us be sober, having put on the breastplate of faith and love, and for a helmet the hope of salvation.  For God has not destined us for wrath, but to obtain salvation through our Lord Jesus Christ,  who died for us so that whether we are awake or asleep we might live with him.  Therefore encourage one another and build one another up, just as you are doing. 1 Thessalonians 5:1-11

For the grace of God has appeared, bringing salvation for all people,  training us to renounce ungodliness and worldly passions, and to live self-controlled, upright, and godly lives in the present age,  waiting for our blessed hope, the appearing of the glory of our great God and Savior Jesus Christ,  who gave himself for us to redeem us from all lawlessness and to purify for himself a people for his own possession who are zealous for good works.  Declare these things; exhort and rebuke with all authority. Let no one disregard you. Titus 2:11-15

But you are a chosen race, a royal priesthood, a holy nation, a people for his own possession, that you may proclaim the excellencies of him who called you out of darkness into his marvelous light.  Once you were not a people, but now you are God’s people; once you had not received mercy, but now you have received mercy.  Beloved, I urge you as sojourners and exiles to abstain from the passions of the flesh, which wage war against your soul.  Keep your conduct among the Gentiles honorable, so that when they speak against you as evildoers, they may see your good deeds and glorify God on the day of visitation. 1 Peter 2:9-12

Let marriage be held in honor among all, and let the marriage bed be undefiled, for God will judge the sexually immoral and adulterous.  Keep your life free from love of money, and be content with what you have, for he has said, “I will never leave you nor forsake you.”  So we can confidently say, “The Lord is my helper; I will not fear; what can man do to me?”  Remember your leaders, those who spoke to you the word of God. Consider the outcome of their way of life, and imitate their faith.  Jesus Christ is the same yesterday and today and forever. Hebrews 13:4-8

“For then there will be a great tribulation, such as has not occurred since the beginning of the world until now, nor ever will.  Unless those days had been cut short, no life would have been saved; but for the sake of the elect those days will be cut short.  Then if anyone says to you, ‘Behold, here is the Christ,’ or ‘There He is,‘ do not believe him.  For false Christs and false prophets will arise and will show great signs and wonders, so as to mislead, if possible, even the elect.  Behold, I have told you in advance.  So if they say to you, ‘Behold, He is in the wilderness,’ do not go out, or, ‘Behold, He is in the inner rooms,’ do not believe them.  For just as the lightning comes from the east and flashes even to the west, so will the coming of the Son of Man be.” Matthew 24:21-27

See that you do not refuse him who is speaking. For if they did not escape when they refused him who warned them on earth, much less will we escape if we reject him who warns from heaven.  At that time his voice shook the earth, but now he has promised, “Yet once more I will shake not only the earth but also the heavens.”  This phrase, “Yet once more,” indicates the removal of things that are shaken—that is, things that have been made—in order that the things that cannot be shaken may remain.  Therefore let us be grateful for receiving a kingdom that cannot be shaken, and thus let us offer to God acceptable worship, with reverence and awe,  for our God is a consuming fire. Hebrews 12:25-29

When he opened the sixth seal, I looked, and behold, there was a great earthquake, and the sun became black as sackcloth, the full moon became like blood,  and the stars of the sky fell to the earth as the fig tree sheds its winter fruit when shaken by a gale.  The sky vanished like a scroll that is being rolled up, and every mountain and island was removed from its place.  Then the kings of the earth and the great ones and the generals and the rich and the powerful, and everyone, slave and free, hid themselves in the caves and among the rocks of the mountains,  calling to the mountains and rocks, “Fall on us and hide us from the face of him who is seated on the throne, and from the wrath of the Lamb,  for the great day of their wrath has come, and who can stand?” Revelation 6:12-17